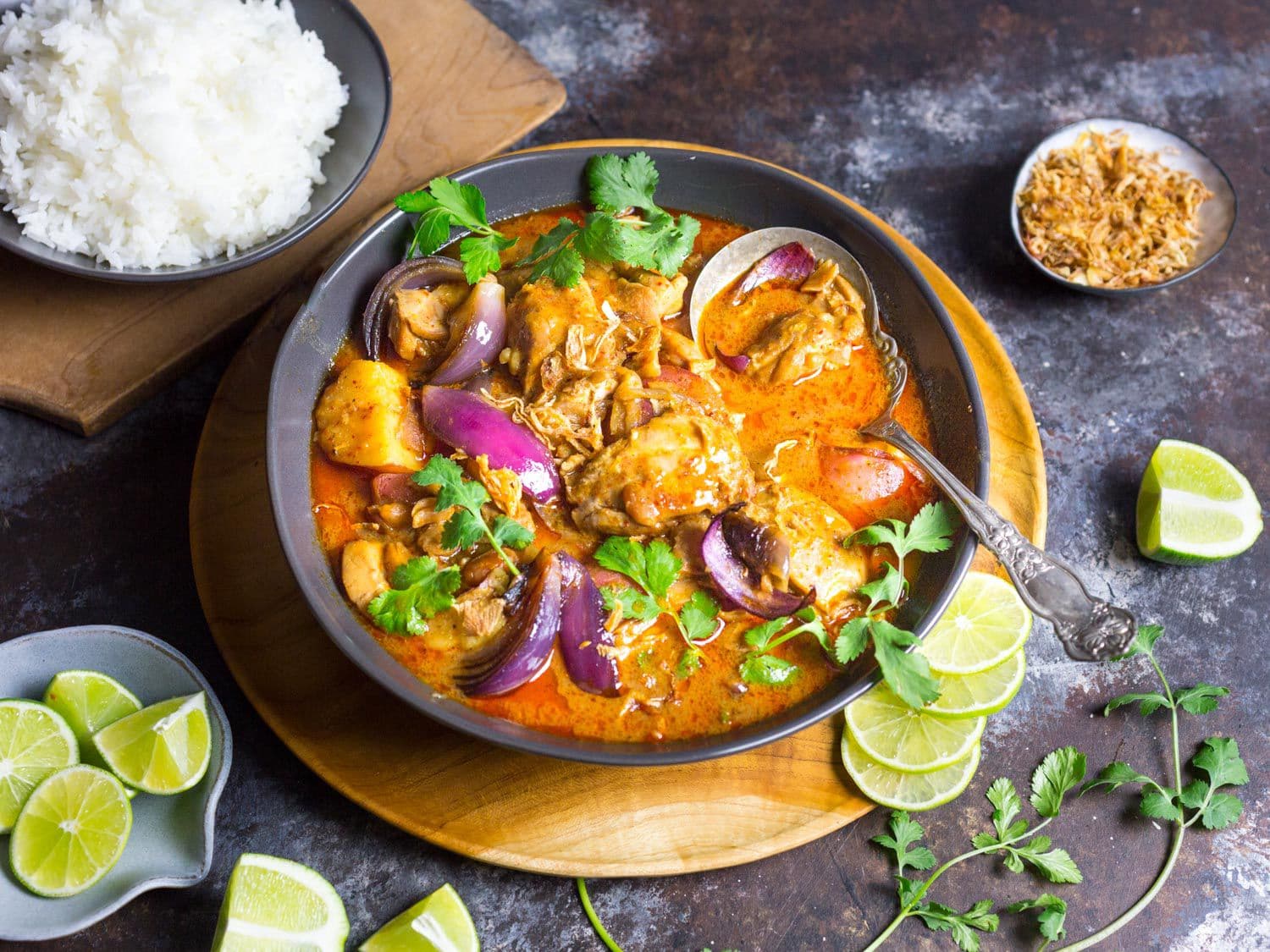 This is one of our most loved dishes by all our guests. Massaman originated in 17th century Central Thailand (so not strictly Isan) at the cosmopolitan court of Ayutthaya. The unique flavors of the Massaman curry paste (nam phrik kaeng matsaman) come from spices that are not frequently used in other Thai curries including cardamom, cinnamon, cloves, star anise, cumin, bay leaves, nutmeg and mace. In the 17 century these spices would have been imported from the Malay Peninsular meaning they would have been affordable only to the highest households making this a truly Rich and Royal meal. Do make our Massaman one of your first dishes when you stay with us. It’s absolutely delicious especially as we serve with our own freshly made flat breads.

A Brief History of Massaman Curry

Despite its strong ties with Thailand, Massaman Curry has its origins in other parts of the world. After all, it is certainly true that it bares little resemblances to curries which are known to be of Thai origin, such as the traditional red, yellow or green curries.

Massaman also combines spices and aromatics which are unusual to the Thai curry cooking process and has a different flavour palate which would support the idea that this dish was brought into Thailand rather than created there.

Most likely the recipe made its way into Thailand during the period of Persian influence during the Ayutthaya Period in the early 17th century.

At this time, King Phra Narai actively encouraged foreign trade and settlement to generate more trade for his Kingdom. As a result, Muslims of Indo-Malay origin as well as Shiite Persian Muslims were given permission to reside in the heart of Kingdom, in Ayutthaya. Naturally this facilitated culinary exchanges and enabled the introduction of Muslim culinary practices such as the Massaman curry into the heart of then Siam.

It became a popular Royal dish though when, according to the scholar Santi Sawetwimon, the dish was introduced into the cosmopolitan court of Ayutthaya through the Persian merchant Sheik Ahmad Qomi, from whom the noble Thai Bunnag family descends.

It was at the court, with some reinvention and merging of more traditional Thai ingredients and cooking methods, that the massaman curry we know today was perfected.

The dish even, it is rumoured led to a Royal Marriage. Whilst doubtlessly there were other more romantic impulses involved, Prince Itsarasunthon (later King Rama II) fell in love with Princess Bunrot (later Queen Sri Suriyendra) after she cooked the dish for him. The prince even wrote about this massaman curry experience in a poem dedictaed to his princess:

Massaman, a curry made by my beloved, is fragrant of cumin and strong spices.
Any man who has swallowed the curry is bound to long for her.

Once established as a popular dish at the court if Ayutthaya, the fame and popularity of the dish spread. Though the first recorded written recipe was only written by Lady Plean Passakornrawong in 1889. She described a dish “Chicken Massaman curry with bitter orange juice” spelling as Matsaman (หมัด สมั่น).