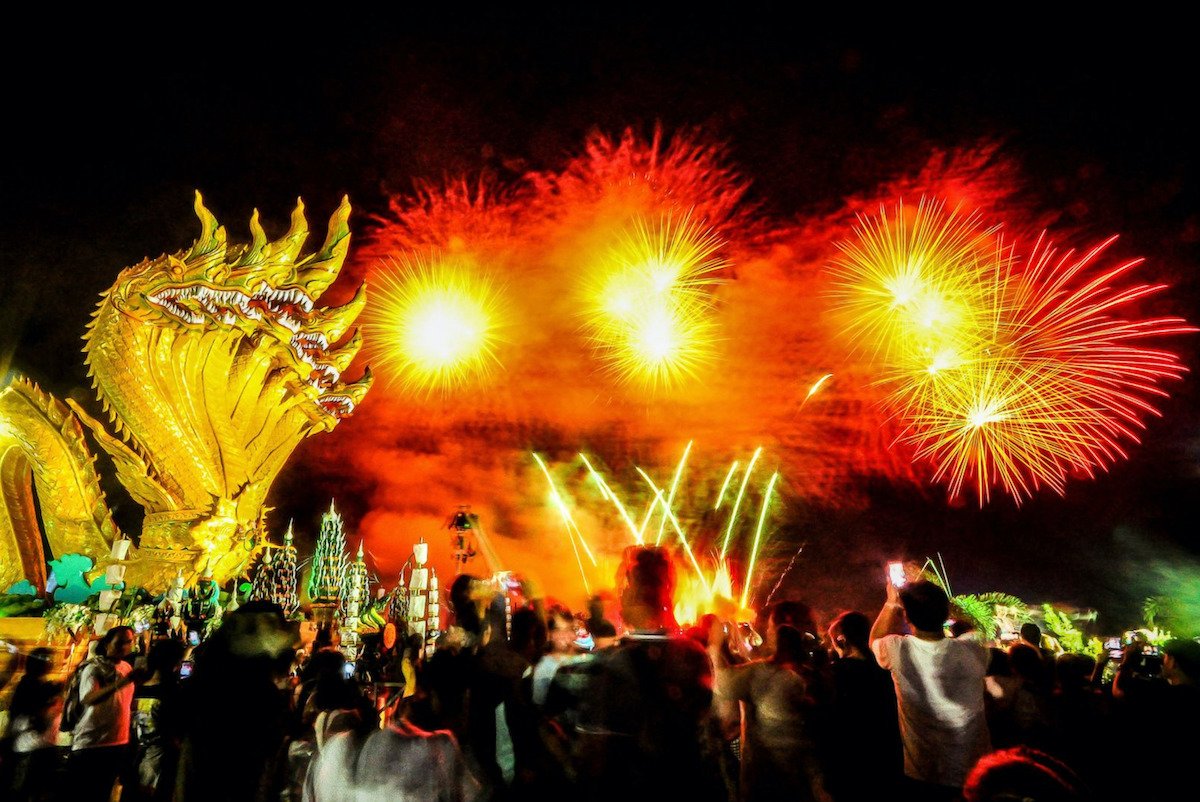 Naga Firballs: A Mystery Without Explanation

The Naga Fireballs is a mysterious and spectacular phenomenon that occurs just once a year on Wan Ok Phansa. On this day, mysterious glowing red fireballs rise from the Mekong before floating high into the air and vanishing.

It is believed that Nagas (mythical semi-divine beings who live in the Mekong) release the fireballs on Wan Ok Phansa to show their respect to Buddha and to celebrate his ascension into Tavatimsa Heaven.

Curiosity around the Naga Fireballs (or Bang Fai Phaya Nak in Thai) has grown each year. Now tens of thousands of people make the journey to the Mekong to both celebrate this important Buddhist day as well as to marvel at the spectacle of the fireballs.

The Naga Fireball Festival – A Festival Like No Other!

With the growing interest, a huge festival has grown up around the event. This is centered around Nong Khai and Bueng Kan. Also, what started as a small gathering just on Wan Ok Phansa has grown into a week long celebration with unique events and activities on each day.

The Naga Fireball Festival hosts bazaars, food fairs, rowing contests and dance performances. These are spread across several locations along the river front. The festival highlight is the parade of illuminated boats with a spectacular light and sound show all celebrating nagas and their gift of the fireballs.

The Naga Legends and the Mekong

Nagas, despite their ferocious image, are generally considered friendly to humans. Over three thousand years of mythology, nagas are generally always depicted as protectors and helpers for humans. Hence nagas are highly revered and often worshipped in their own right. Buddhist temples and palaces are adorned with various nagas especially at their entrances where they act as guards.

Among the notable nagas within Buddhist tradition is Mucalinda who is both the King of the nagas and protector of the Buddha. Mucalinda is often depicted giving shelter to Buddha by covering him with his seven snake heads.

Nagas are also interlinked with the Mekong in both Thai and Laos mythology and belief. Northeastern Thai people believe that the Mekong River is actually the route of a naga named “Pu Chao Sri Sutho”.

Over the years, there have been several attempts to explain the fireballs.

One scientific explanation is that the fireballs are a result of flammable phosphine gas generated by the marshy environment. Somehow this is then drawn up by the Wan Ok Phansa full moon to create the fireballs.

Other less scientific explanations include Laos soldiers firing flares or tracer rounds across the Mekong.

Some speculate that, whatever the original cause, the fireballs are now assured to happen thanks to Nong Khai tourism officials. This is, after all, the biggest event of the year for this sleepy little boarder town and brings in much need income for the locals.

At Nakara Villas and Glamping, we take joy in continuing to believe the fireballs are created by nagas to celebrate the end of Lent. This is both the most enjoyable explanation and the only one that really explains the phenomena as it is witnessed each year.

When Can I See the Naga Fireballs?

Wan Ok Phansa marks the end of the 3 month long Vassa. This always takes place on the night of the first full moon of the 11th lunar month. Generally this always falls in October and for 2021 it falls on Thursday 21st October.

Vassa is annual retreat observed by Theravada practitioners that lasts for three lunar months, usually from July to October. As this period coincides with the rainy season, it is often referred to as the “Rainy Retreat’ in English.

For the duration of Vassa, monks will remain in one place, typically a monastery or temple grounds. In some monasteries, monks dedicate the Vassa to intensive meditation.

Some Buddhist lay people choose to observe Vassa by adopting more ascetic practices, such as giving up meat, alcohol, or smoking. This is why Vassa is also sometimes called Thai Lent in English though Vassa predates Christian Lent by some 5,000 years.

Getting to the Nong Khai Naga Fireball Festival

The best place to experience the festival is at Nong Khai. Nong Khai is a wonderfully pretty boarder town with a road & rail bridge to Laos. The town itself is worth a days visit alone.

Nong Khai doesn’t have its own airport so the best way to get there is to first travel to Udon Thani and then take a bus or train there. If you have your own car, then it is just a pleasant 40 minute drive through some wonderful Isan countryside.

There is also limited accommodation in Nong Khai which sells out quickly for the Naga Fireball Festival. The good news though is that Nakara Villas & Glamping is perfectly located for quick and easy access to Nong Khai. So why not enjoy a few days of luxury in one of our Villas or Domes and still be within a short drive to the festival.