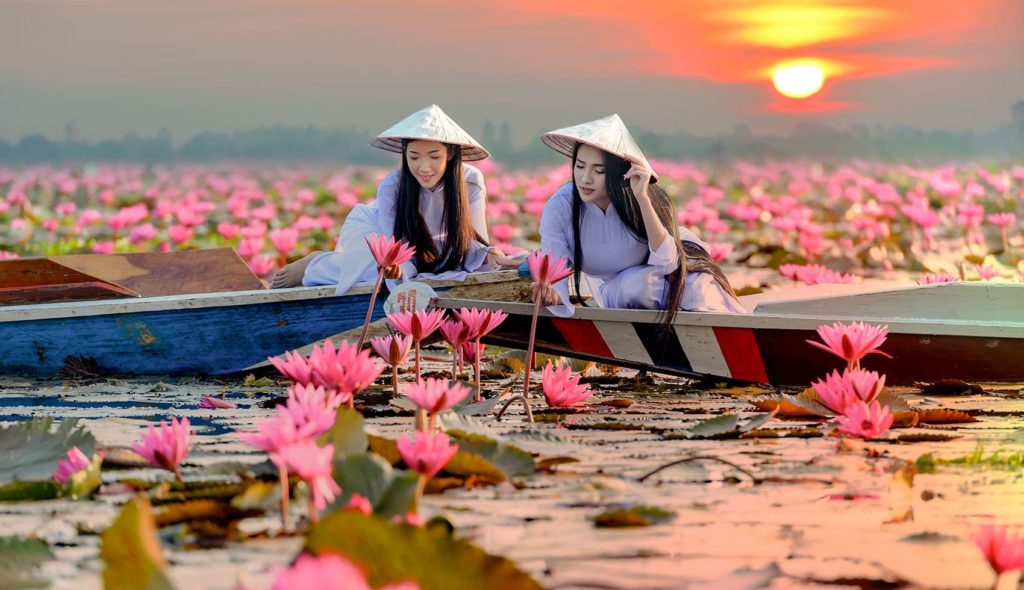 A Stunningly Beautiful Lake with an Ancient Legend

The Red Lotus Lake is a truly picturesque and remarkable natural wonder.  Here you will find yourself floating across sunlit waters shimmering with starbursts.  Stretching across the entire horizon, you will see nothing but a magical, endless tapestry of pink tropical water lilies.  Spending an early morning on The Red Lotus Lake is to experience absolute serenity and tranquillity; a complete contrast to the hustle of Bangkok or Phuket.

The lake, whose official name is Nong Han Kumphawapi, was once unknown to most tourists.  Then, after being featured on international media, it popularity grew till it became an Instagram star.  Now it is widely recognised as one of the priceless jewels of Unseen Thailand.

The banks of the Red Lotus Lake also provide the backdrop for the ancient Isan legend of Nang Ai.  This gives the lake a truly mythical feel besides its natural beauty.

Pink as Far as the Eye Can See

‘Red Lotus Lake’ is the English translation of the lake’s popular Thai name ‘Talay Bua Daeng’.  Actually, a more accurate and direct translation is ‘Red Lotus Sea’.  This though creates three errors in translation.  Firstly, the flowers are Tropical Water Lilies and not Lotuses.  Secondly, the predominant colour is pink and not red.   Thirdly it is clearly a lake rather than a sea.

Tropical Water Lilies are equally as pretty as Lotuses and much more majestic.  Their flowers rise up and sit some 15-30cm above the water and grow up to 40cm wide.  Lotuses are smaller and tend to sit on the water.  It is this characteristic of water lilies that give the lake its spectacularness. They also create the wall of pink that extends as far as the eye can see.  So don’t be disappointed if you were expecting lotuses.

Despite the misdescription, the growing popularity of the Red Lotus Lake has inspired many imitations.  Other Thai regions have tried to artificially create their own Lotus Lakes.  Yet none of these come close in beauty to Udon Thani’s lake and which blossomed without help or hindrance.

Floating on Air Over a Sea of Lilies

To describe the experience as ‘floating’ is also no exaggeration either as every instagramer’s must-have shot proves.  The standard photo typically shows the instagrammer perched, often in a meditative yoga pose, at the front of a wooden canoe hovering impossibly above the water.

Yet this is no trick or an exclusive for those with high followers.  Everyone experiences the lake in small private boats as the lilies sit in lake’s centre and cannot be seen from the shoreline.

These boats take you on an Alice-in-Wonderland ride to the centre of the 11,000 acre lake for your own private viewing of nature’s most surreal yet perfectly composed and coloured panorama.  Be prepared to have your breath taken away and to leave with an enhanced understanding of what it means ‘to be at peace with the world’.

Nang Ai: The legend Behind the Lake

The legend of Nang Ai is one of two great narratives of Isan storytelling (the other is Phya Khankhaak: The Toad King).  There are many versions of the Nang Ai legend of which the original is an epic poem first written on palm leaf manuscripts.  Only fragments of this now survive.  An English translation of the poem by Wajuppa Tossa is available on amazon.com of which a formative introduction can be read here.

In the poem, Nang Ai, though many life cycles, is always paired with Phangki.  In each life cycle, Nang Ai is always the dutiful wife whilst Phangki is uncaring and ungrateful.  Nang Ai eventually tires of the situation and prays that in the next life cycle that they never become husband and wife again.  In her despair, she goes further and expresses a revengeful longing that Phangki will die at her own hand.  These wishes will ultimately lead to catastrophe for both Nang Ai and her entire kingdom.

In that next life, Nang Ai is born a princess to a Khmer King during the 13th Century.  Famed for her beauty she captures the heart of Prince Phalanges of Pat Pong City with whom she also falls deeply in love.  Elsewhere, Phangki is born a Prince to Phaya Nak, the Grand Nāga who rules the Deeps.

The Death of Nang Ai and the Birth of the Lake

During a rocket festival organised to end an eight-year drought, Nang Ai unknowingly kills and eats Phangki.   Phangki had transformed himself into an albino squirrel in order to spy on his former wife.  Nang Ai, not realising the true nature of the squirrel, orders it hunted and cooked after seeing it in the Palace Gardens.  The meat from the squirrel miraculously expands providing enough food for the whole kingdom.  Thus, she has been granted the wish she made in her previous life but with terrible consequences.

Phaya Nak, enraged at his son’s death, sends Nagas to the surface to destroy the Khmer Kingdom and to kill anyone who ate the meal cooked from the squirrel.  The Nagas, as they rise to the surface, cause a flood using the muddy waters from their underworld home.  The rising waters destroy the Khmer kingdom and drown its people. Phalanges tries to save Nang Ai, but she is swept from his horse by a flick of a Naga’s tail and is lost.  Phalanges, in his turn, dies from grief and rises up as a ghost warrior with a ghost army to fight the Nagas in an enduring, endless battle.

As the floodwaters finally recede, they leave behind the Nong Han Kumphawapi Lake.   In eternal remembrance to Nang Ai’s beauty and her tragic love, the Lake is blessed to blossom every year with millions of Pink Tropical Water Lilies.

When to Visit The Red Lotus Lake

The Red Lotus Lake is at its most magical during the winter months of November through to February.  This is the peak blossoming season for Tropical Water Lilies.  As every Lake Aficionado will advise: Go Early! For it is only in the morning when the Lilies flowers open.  When the sun rises, the flowers shut throwing away their magic and wonder.

It is this writer’s preference to arrive at the lake at between 6:00 am and 6:30 am to experience the lake with the rising sun and before the crowds steal away some of the serenity. At this time, you can still find yourself isolated in a secluded spot amongst the flowers with your only companions being Great White Egrets and the occasional fisherman; both hunting for their respective breakfasts.

For those who are not naturally early morning risers, salvation is available from coffee stalls next to where you board your boat.  There are also two surprisingly excellent cafes that serve both Thai and Western food.

Getting to the Lake

Take a  Car or a Tour to Ban Dam Village:  Visitors to the lake should travel to Ban Diam, a small village on the North bank of Nong Han Kumphawapi Lake (google map location is at the bottom of the page).  This is a pleasant and easy drive that takes 45 minutes from Udon Thani centre.

There are limited public transport options. So it is recommended to either hire a car or go as part of a tour.   A taxi and hire car are both around 1,000-1,500 THB; a tour would be much cheaper.  Hotels often run packages with free travel to the Red Lotus Lake.  So do check if your hotel offers this or alternatively can organise transportation for you.

Choose Short or Long Boat Trip:  At Ban Diam you will find ample parking, plenty of street food, a small market as well as two cafes. There are also several toilets if needed.  Once you arrive, head to the pier where you board the boats.  Previously you could book either a 60 minute trip or 90 minute trip. However on our most recent trip only the 90 minute trip was offered.

Choose a Boat or A Canoe:  Typically you pay approximately 500 baht for the whole boat of which there are two types.   The wooden canoes, loved by instagrammers, take two people.  Larger plastic hulled boats can take group of 4-6 people.  Sometime a supplement is asked for solo travellers during busy periods.  The people that run the pier are friendly, helpful and well tuned to the needs of their tourists.

Lifejackets are provided:  Whilst the lake is large in area, it is only 1-2m deep.  All boats though are still equipped with life jackets most of which are in good working order.

Combine With a Trip to…

Combine with Unesco Heritage Site at Ban Chiang: After your trip, you can take a while to stroll along the bank of the lake or enjoy breakfast at one of the restaurants.  Eggs Isan style are well served in both.  Beyond that, there is little to keep you at the Lake.  You can extend your day by adding in

Both are to the North East of the Red Lotus Lake and to the East of Udon Thani.