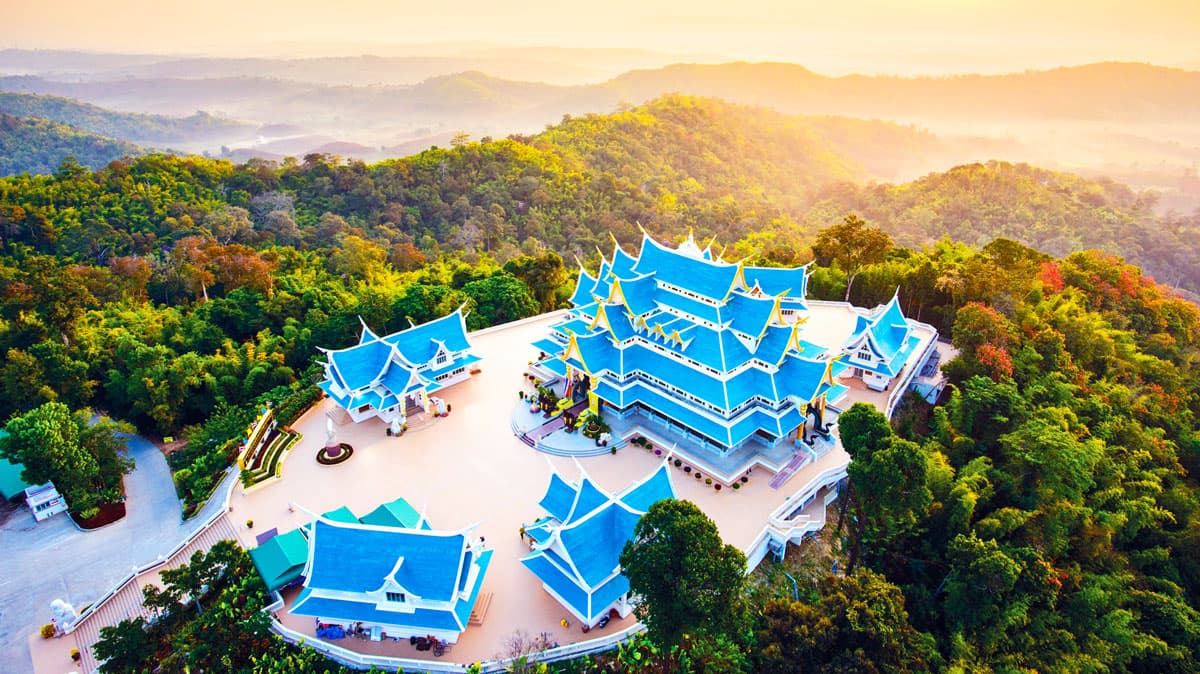 Wat Pa Phu Kon sits on top of a hilly woodland in a remote part of Na Yung–Nam Som National Park.  During the day its turquoise-green roofs shimmers the sunlight back through the forest like sunbursts off a mountain stream.  At night the temple’s warm yellow lights glow brilliantly against the blackened mountains. Thus creates the illusion of a ship floating across dark ocean waters.

The interior of the temple is no less striking than the outside.  Within the Wihan, or main assembly hall, lies a 20m statue of a Reclining Buddha.  This iconic image represents the historical Buddha during his last illness when he is about to enter nibbāna and gain release from the cycle of rebirth.

The statue was crafted entirely of Italian Carrara White Marble with the marble sourced from the same quarries as Michelangelo’s David, Sheikh Zayed Mosque and Marble Arch London.  On auspicious occasions, dappled light shines through the stained glass ceiling. This light casts an array of mesmerizing patterns over the Buddha statue.

The Protector of the Forest

The opulence of Wat Pa Phu Kon’s interior and exterior is equally striking to locals and tourists alike.   The temple’s names actually translates as Temple on the Hill of the Forest and around it lies a third treasure.  From its veranda you can gaze down on a valley made up of 400 acres of preserved forests that stretches out beyond the limits of your eyes.    The sweeping views from the temple take in a woodlands that straddle the three provinces of Udon Thani, Loei and Nong Khai.  On a clear day Laos is also visible to the North and North East.

If Wat Pa Phu Kon, from its commanding view point over Na Yung–Nam Som National Park, seems like a protector of the forest then you have found it purpose.  The temple was designed as a monastery for forest preservation and to remind people about the essentialness of nature.  Its hill top location is a perfect perch from which to act as the forest’s guardian casting a protective gaze over the woodlands and animals that all lay beneath it.

Wat Pa Phu Kon was built between 2010 and 2013 though the seeds that led to its creation were planted in 1984.  Phra Ajarn Fan Ajaro, a famous Buddhist philosopher in Vipassana Meditation, sent a group of disciples on a pilgrimage to Sakon Nakhon and Udon Thani provinces.  Here they were inspired by the work being done at the forestry temple Wat Pa Ban Na Kham Noi to protect forests from destruction through illegal logging.  The group ignited a primary project in establishing a forestry temple Called Wat Pah Na Kham Noi whilst also restoring 750 Rai of deforested land.

After this was completed they were directed, again by Phra Ajarn Fan Ajaro, to Phu Kon forest. This forest was at a point of significant degradation due to both legal and illegal logging. A decision was taken to build a second temple here to again drive preservation of the forest.  Permission for the temple was granted by the Royal Forest Department in January 1987.  Funding for the temple came from one single individual who donated the entire 320m Thai Bhat (10m USD) for the constructions of the temple – a generous gift on any scale.

The quality of the design, the intricate details, the quality of the materials may have come through the generous donation.  The splendour of the temple may be what draws people to Wat Pa Phu Kon.  Its remote location also makes it unparalleled for observing the the night sky as many photographs testify.  However, what is truly priceless is the preservation of a forest that crosses three provinces and is now a protected home to several endangered animals and rare species of plants.

An Endeavor of Extraordinary Proportions

Building Wat Pa Phu Kon was an endeavour of extraordinary proportions.  Partly due to its hilltop location and the steepness of the approach making construction difficult.  Partly also due to the attention to detail in both design and selection of materials.

The marble for the Reclining Buddha was selected personally by Buddhist Monk Puttaborrisatsee, who oversaw the temple’s entire construction, from a quarry in Carrara in Italy.  There he selected a total of 43 blocks of white marble each weighing between 15 and 30 tonnes.  Shipping the marble back to such a remote location presented layer over layer of further challenges.  This feat is all documented in photographs displayed at the temple.

The forest around the temple is dense and with trees, bamboo and populated by several groups of wild monkey and peacocks.   The road to the temple is itself heavily tree lined.   This creates a pretty tree tunnel decorated with beams of sunlight breaking through and illuminating the road ahead of you.  As you reach the top, and break past the final trees, the splendour of the both temple and the panoramic forest view are both laid out before you.  The last section of road is also the steepest and should be taken with care.

The temple grounds are dominated by the Wihan though there are several smaller buildings in proximity which house the gift shop, restaurant and rooms for the monk.  There is a basement level with space for monks and pilgrims to sleep and eat though this can’t be visited.  Within the temple grounds there are also a hospital, school and facilities for treating injured forest animals.

The temple entrance is guarded by two Chinese style Foo dogs, made from the same Carrara marble as the Reclining Buddha.  These sit either side of the short staircase that leads up to the main temple area.  Around the temple most entrances to each individual buildings are guarded by further marble Foo Dogs as well as intrinsically crafted pairs of metal Nagas.

Within the Wihan, the room containing the Reclining Buddha has four massive embossed double bronze doors on each side.  A further 22 metals panels sit on the walls and surround the base on which the Buddha status sits.

These panels are made from embossed, partially fire-gilded copper sheet.  Together, the doors and panels contain images of Buddha telling the stories of his journey to attain the 10 perfections.  Above each panel, there is an engraved phrase taken from the Buddhist Itipiso Chant.

The splendour of the temple and majesticness of the Reclining Buddha are captivating.  It is easy to be so distracted by these to completely miss the spectacular views of the forest below.  The valley below is especially breathtaking in early morning with the rising sun. It is doubly impressive during the winter months when the valley fills with wintery fog. Equally mesmerizing is seeing the temple on a cloudless night when the stars pour over it.

On the road up to Wat Pa Phu Konad, a right junction takes you to Chedi Prathom Rattanamahaburaphachan.  This a 25-meter high golden stupa was built Lanka-style.  Its design was inspired by the architectural style and color scheme of the Phra Pathom Chedi in Nakhon Pathom – the world’s largest stupa.

The stupa sits on a plateau at the top of 200 steps.  An inclined elevator to the left of the staircase offers an alternative to the steep climb for just 20 baht per person.  Inside the stupa there are two floors of rooms both with ornate domes richly decorated in gold and red.

The orb at the top of the of the Chedi contains Holy Buddha’s relics.  The second floor has displays of carved marble images celebrating deceased monks who were famed for their mastery of meditation.  The first floor house further pictures depicting the work of former monks.

Getting to Wat Pa Phu Kon

Wat Pa Phu Kon’s gates are open from 5:30am perfect for photographing the sunrise.  However, the doors into the temple itself are only open between 8:30am to 5:00pm.  Admission is free.

It is in a remote location of Na Yung–Nam Som National Park about 120km from Udon Thani centre.  Hence the easiest way to get there is from Udon Thani is by private car, car hire or tour group.  The google map location is accurate and the temple is well signed posted.

If travelling from Bangkok, it is possible to take an air-conditioned bus to Na Yung Bus Station which is 8km from Wat Pa Phu Kon.  The journey time is about eleven and half hours.  The buses generally leave in the evening and arrive the following morning.

There is ample parking next to both Wat Pa Phu Kon and Chedi Prathom Rattanamahaburaphachan.  You can find a small cafe and a road side restaurant near the temple both of which are more than adequate.  The restaurant has a series of unusual and eclectic straw statues which are worth spending a few minutes to see.