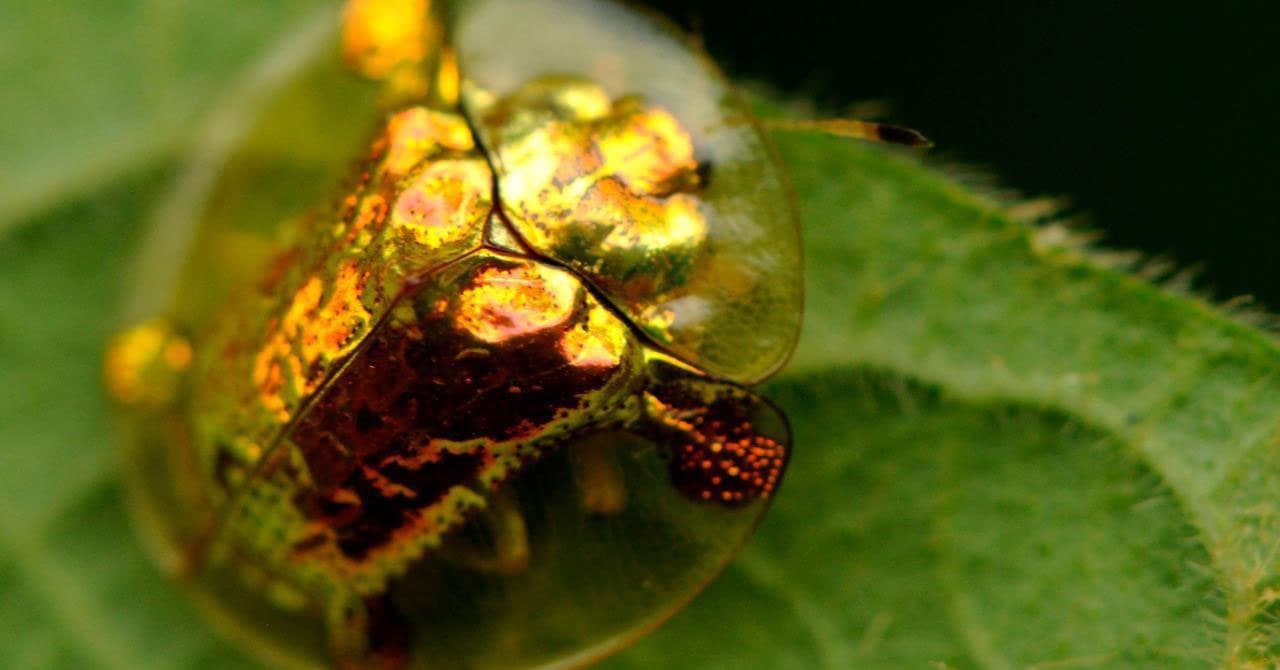 A few months ago I never knew these amazing pieces of nature existed. Then on Christmas Day 2020, I awoke to find a Spotted Tortoise Beetle sitting happily on our bedroom balcony railing.

It was stunning to see with its transparent shell and distinctive black, yellow and white colouring. Research led me to discover the whole species of tortoise beetles (or Charidotella sexpunctata) and their amazing kaleidoscope styles and colour schemes.

Nature was clearly at her most creative when she evolved tortoise beetles. It was also a very special Christmas surprise at the end of a difficult year.

My Spotted Tortoise Beetle stayed with us for several minutes before flying off to munch on the leaves of a nearby bush. It seemed a lucky encounter though shortly afterwards tortoise beetles faded from my mind.

Then, in summer of 2021 as we waited the first rains of the year, I saw a flying gold nugget. At least that was what it looked like to me. The shiny, gold metallic brightness was unmissable even from 20m away.

Mystified, I wandered out into the garden to discover my first Golden Tortosie Beetle. An even more beautiful and stunning species than its spotted cousin: the same transparent shell, the same funny legs extending out but this one has a brilliant gold colouring with deep red splashes.

I tried to take a photograph but it’s reflectivity was so intense that it crashed the camera on my iphone! Yet it was still amazing to see and to just know they existed….and existed in our garden too!

Rather like my Spotted Tortoise Beetle, I thought my encounter with a Golden Tortoise Beetle was just another lucky one off chance encounter. After having never seen one in 50 years, to see two in six months was quite something.

However, a few days later we were visited by another adult Golden Tortise Beetle. This one flew through an open door and plumped himself right down on our sofa bang in the middle of my son Eugene and I.

Showing no fear at all, he seemed quite comfortable walking on our hands and saying hello before finally also flying off! This time we caught the action on video!

Incidentally, though you can’t see it on the video, they do change colour from bright gold to a dark red depending on their mood, hydration levels and age. How they do this is, apparently, still a mystery.

Now we are seeing Golden Tortoise Beetles every day – and often several at once. Even as I sit here I can see two on happily ascending our living room window. Another three are walking upside down, spiderman-style, on the inside of veranda roof. Another two are flying from leaf to leaf sending flashes of brilliant gold whilst their flying around our morning glory tree.

We do now understand that they will be us for a short period of time as they are dormant during the winter months. Hopefully this will give our morning glory trees a chance to recuperate.

We have though enjoyed learning about these bugs and watching them through their entire lifecycle. Typically mating begins in spring (and from our observations they are very amorous animals) after which the female lays multiple eggs on the underside of a shaded leaf.

The beetles are first born as lava after about 10 days. It must be said and actually look quite frightening (thing space horror films) compared to their adult forms. Initially they stay clumped together and the mother beetle returns regularly to feed them.

They then go through 9 different lava stages before emerging as full adults about 40 days after birth. Each of these stages seem to be weirder than the previous and moving further away from the finished article than nearer to it.

At which point they mainly spend their days eating leaves before entering their dormant stage in winter. And they do eat a lot! A single beetle seems able to eat a fair chink out of a morning glory tree leaf!

Whilst we worry about our morning glory trees, which are seemingly theuir absolute favourite food for breakfast, lunch and dinner, we are excited to have these amazing bugs with us at Nakara Villas and Glamping. Rather like their red ladybird cousins, they seem so friendly, happy and curious. They are joyous to see and it is still incredible to spot the flashes of gold as they fly around our garden!